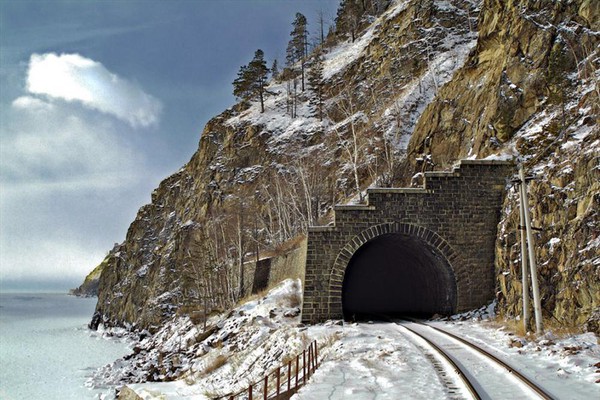 Circum Baikal railway is one of Russia's most beautiful sights. Constructed from 1891 to 1915 it cost Russian Empire an insanely large amount of money. Both the exiles and hired workers took part in the construction of CBR. The local builders on the contrary were hardly involved in the process. The last step of the construction was a railway station building at Slyudyanka settlement made from marble.

Initially, Circum Baikal railway began at Baikal station and ended at Mysovaya station. The total length was 260 kilometers. Over time, the railway changed a lot. Some stations went underwater and the others were abandoned. Today the section from Baikal station to Slyudyanka station with a total length of 94 kilometers is a unique monument of engineering. This part of the way is what we now call Circum Baikal railway.

There are many man-made objects: various tunnels, bridges, viaducts and retaining walls. This fact made CBR the most difficult railway construction in Russia. There are 39 tunnels and more than 250 bridges on the way. The length of the largest tunnel is 800 meters.

Circum Baikal railway is also called "the Golden Buckle of the steel belt of Russia”. It is “Golden” because of the extremely high cost of the project, and “buckle” means it helped to connect the two halves of the Trans-Siberian Railway divided by lake Baikal.

There are a few public trains on the road every week. They connect remote settlements with the regional center. However Circum-Baikal railway today is primarily a tourist attraction. The Baikal train tour on CBR takes the whole day. As a part of Baikal tours from Irkutsk, tourists can chose between an electric train and an old steam locomotive train. Both have all the necessary conveniences including toilets. Video screens broadcast information about Baikal and documentaries about the history of the railway. The route of the Circum Baikal railway tour passes along the amazingly beautiful shores of the lake. The train makes several long stops on its way (the main are Angasolka, Polovinnaya, Kirkyrey and The Italian Retaining Wall). At each stop you will be taken on a mini-tour with a professional guide who will tell you fascinating stories and the mysterious legends of the place.

Each stop lasts from 15 to 40 minutes. Tourists usually get off the train and spend some time outside taking photos, buying souvenirs or eating at local cafes. The time on the budget tour is quite enough to dip into the cool waters of Baikal.